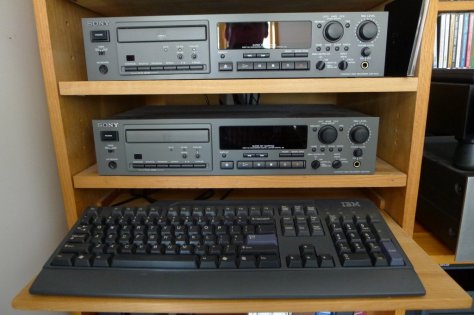 I know, I know, but before you tell me how old these machines are, hear me out!  24 bit A/D, D/A converters, Sony’s well-received Super Bit Mapping filter, on board digital EQ and limiter, along with a bunch of other CD burning goodies like CD-text, track marking, along with fades in and out.  Remember, this was years before Alesis’s Masterlink CD burner.

Unfortunately for Sony, these machines were launched right before all the digital file transfer, sharing, and hard disk recording went wild.  It’s funny how everyone disliked the “sterile” sound of early digital recordings and analog transfers, but this unit was ahead of its time for just that remedy.   The recorder is PC keyboard compatible for all functions.  This thing is a jewel.  So much so, I have since read how some well-known artists and engineers still use it for its converters alone.

I see the secret has been out for awhile now, and it is getting harder to find at lower prices on Ebay.   I snatched up three for a song and a dance some time ago,  and they all work fine.  They are fantastic for converting any vinyl you may want to get in the digital domain, as well.  They also made its big brother, the CDR-W66, which had a few digital clock options, as well as XLR inputs/outputs.  Catch one while you still can!