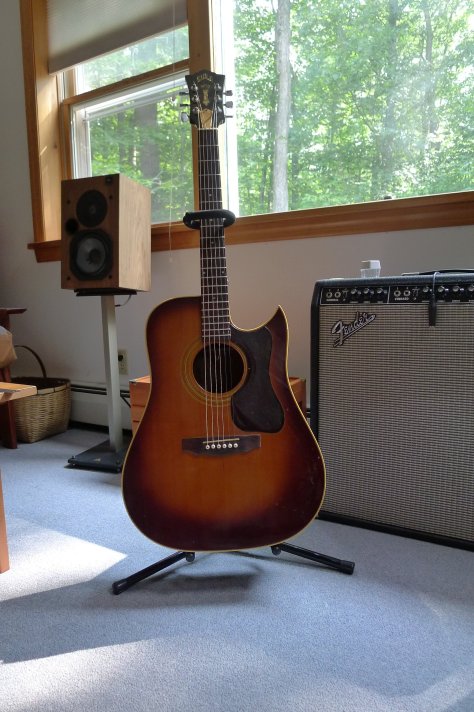 Latest project in the studio’s shop is a very cool Guild D40C sunburst.  Looks to be a late 70’s guitar with a busload of character.  I have been asked to see if I can lower the very high string action that has developed over the years.  I knew pretty much immediately that it was a candidate for the dreaded neck reset.  So what are the options?

The fret board extension has actually sunk into the top so much that the sound hole is misshapen.  This sunken angle moves the neck and fret board away from the strings, which stay in a straight line from the nut to the saddle in the bridge on the lower part of the guitar body.   This creates a very high string action (distance between strings and frets). 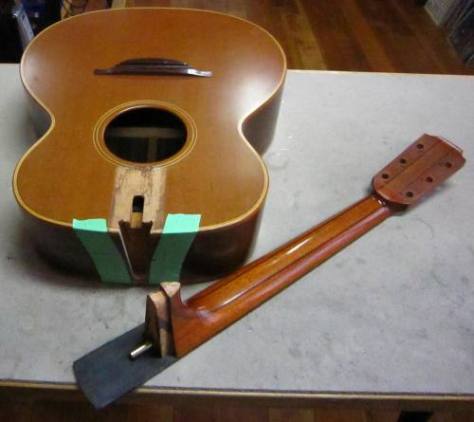 For those not familiar with resetting a guitar neck, this means removing the neck by steaming the neck/body joint so it can be unglued and removed from the body of the guitar.  The angle of the neck joint is then retooled to a new angle, inserted and glued back into the body of the guitar.  This is a very costly and time-consuming operation, left only to the most capable guitar repair person.

After consulting with the guitar’s owner, we came to an understanding that a neck reset was not an option because of the expense,  and I was asked to do what I could to improve the action in some other less costly way.  Unfortunately, the saddle  (located in the bridge slot) had already been sanded to reduce its height and it was very close to the surface of the bridge top. 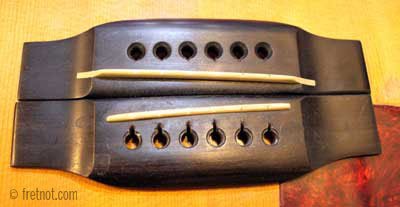 Fortunately, the bridge of the guitar was original and had no issues, which meant I could plane it lower and reduce its height to allow me to file and lower the saddle height, as well.  Easier said than done!  I was able to reduce the string action 1/8″ from its original 1/4″, which is pretty darn good.  Now that the string action was reduced quite a bit, a few more gremlins began to show their annoying little heads.

The slots in the nut are worn low , so I will have to fill and re-slot the nut.  The third fret looks to be high and will require some filing.

Moral of the story?  One correction can always lead to another problem when working on the action and playability of any guitar. One always needs to be prepared for the can of worms that can show up in the course of repair.  Well…..I have procrastinated enough, time to get back to it……