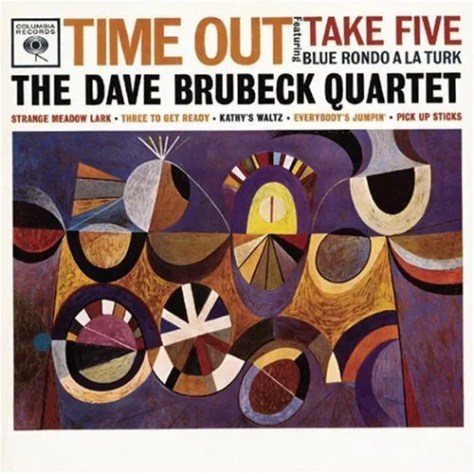 I have an autographed copy of a fairly old pressing of this Dave Brubeck Quartet album, Take Five. However it is not as old as the original which was released in 7 inch format in 1959. Long playing record and a long story to tell.  Since I would have been three years old at the time this recording was made, I did not witness Mr. Brubeck sign his signature on this Columbia Record label recording.  Therefore I only have someone else’s memories and provenance to vouch for it’s authenticity.

What I treasure more than the signature is the content.   As a kid, I took drum lessons in Ridgewood, New Jersey from Dave Tough. Dave was the drummer (in photo below)  for the well known 1940’s band leader, Jack Teagarden. 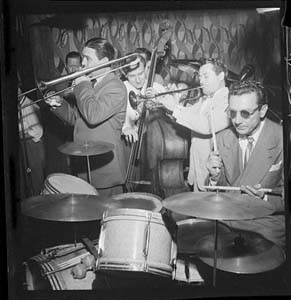 At the time all I wanted to play was “Wipe Out” by The Surfaris, and Dave, an elderly gentleman at this point in time,  was trying his best to get me to learn quintuple meter ala Take Five. It wasn’t going to happen, but I like the way he was thinking!  Fast forward four or five years and I realized (insert dope slap here) Dave (the drummer) was a genius and I was certainly no Einstein.

While I credit the Surfaris with a pretty cool drum riff,  I believe Mr. Brubeck’s masterful use of 5/4 time has the edge in the “coolest thing I have ever heard” department.   That two chord piano vamp is no slouch either.   The sax player and author of the song,  Paul Desmond along with drummer Joe Morello , and  bass player Eugene Wright helped Dave created magic on July first, 1959 at Columbia’s 30th street studios.  Ok, so it wasn’t that long a story…………